A rundown of the major taxes in China for foreign businesses

China is in the process of going through some major tax reforms in the hope of helping local companies and neighbouring countries save billions of dollars on taxes in 2016.

The continuation of tax reforms were emphasized by the statement released by the National Bureau of statistics at the end of January, going into some detail about China's plan to expand its value-added tax (VAT) reforms to let industries that enter the scheme this year pay 560 billion yuan ($85.1 billion) less in tax than they did in 2015.

In addition to this there is also the Belt and Road Initiative that is set to help neighbouring countries doing business with China such as Cambodia, India, Indonesia, Pakistan, Romania and Russia to benefit from tax agreements.

This is certainly great news for domestic companies in eligible industries and for the countries along the Belt and Road, but when it comes to foreign enterprises looking to move their operations to China, what are the relevant tax costs that their business may incur?

Read on to find out what the major taxes in China for foreign businesses are today, and how where you register your company may help you save below... 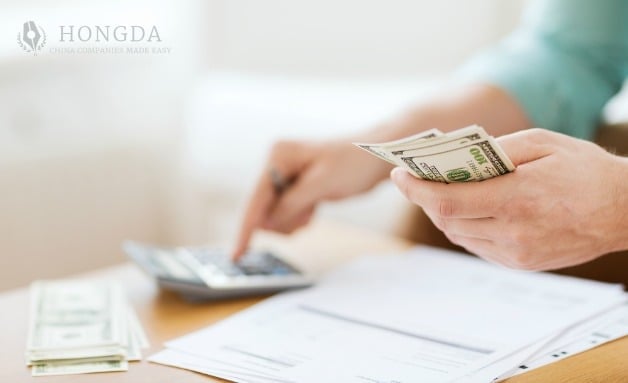 All enterprises that generate income in China are required to pay CIT (except those of a sole proprietorship and partnership). The standard CIT rate is at 25%, but qualified enterprises which are engaged in industries encouraged by the China government in the following areas in southern China are subject to a reduced 15% rate:

More on The Qianhai New District and its prefential tax policies for foreign businesses here!

Withholding CIT on payments to non-tax residents is currently set at a reduced rate of 10%. This tax is applicable to:

-dividends, bonuses and other equity investment

Individual income tax is taxed according to progressive rates that range from 3% - 45%. Enterprises located in Qianhai that hire foreign staff that are categorized as a high-end talents or talent in short supply are eligible for goverment subsidies on a salary which exceed 15 percent of their taxable salary income.

VAT is an indirect tax that has gone through major reform, with China effectively replacing its Business tax (see below) with VAT nationwide in August 2013. VAT tax payers are classified as:

Small-scale tax payers are not eligible for VAT rebate, and they are unable to issue invoice, otherwise known as 'Fapiaos' in China.

BT applies to the provision of services (excluding processing services and repair and replacement services), the transfer of intangible properties and the sale of real estate properties in China. Due to the VAT reform some services are now subject to VAT and not business tax. General BT rates range from 3% - 20%, but they vary depending on the industry, and are subject to change as China expands its VAT reform to include more industries.

A tax levied on the income realized from the transfer of state-owned property at progressive rates ranging from 30% - 60%.

The owners, users or custodians of houses and buildings need to pay property tax at the applicable rate of 1.2%, calculated on the residual value minus between 10 percent and 30 percent of the original value of the property (as determined by the local government).

A tax levied at a fixed amount annually on the owners of vehicles and vessels used in the China. Manufacturers or importers who produce energy-saving vehicles/vessles or new energy vehicles/vessles are eligible to enjoy a half-reduced tax rate may apply to the Ministry of Industry and Information Technology (MIIT) for the tax incentives.

A tax levied on enterprises or individuals who execute or receive "specified documentation" in China such as contracts and accounting books with tax rates that vary between 0.3% - 1%.

Duties are imposed on goods imported into China and are generally assessed on the CIF (cost, insurance and freight) value that include a total of 8.294 taxable items. The rate of duty depends on the nature and country of origin of the imported goods.

A tax levied on the transferees or assignees on the purchase, gift or exchange of ownership of land use rights or real properties, with the tax rates generally ranging from 3% - 5%.