Blog How To Attract Chinese Staff When Doing Business In China

How To Attract Chinese Staff When Doing Business In China 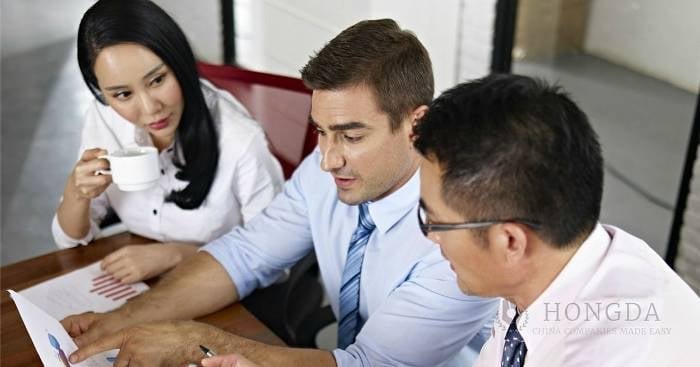 So you're a foreign company doing business in China, or looking at opening a company here soon.

What's the next step?

That's why in this blog Hongda are going to explore the Chinese labour market, and how to attract Chinese staff to your company here in China.

What characterises the Chinese labour market?

How do Chinese staff behave when looking for a job, or in their work?

What expectations could local workers have?

Keep reading as we answer these questions and offer advice to help you find the right local staff for your positions...

The advent of the Wholly Foreign Owned Enterprise has made it easier than ever for foreigners to do business in China, but we must consider the reasons why setting up a business in China was attractive in the first place when thinking about hiring local Chinese staff.

Foreign business people often consider that being in China offers them some or all of the following benefits:

Of course, being in China it's unlikely you can go it alone, even if you're one of the many foreigners these days who does speak good Chinese.

Well, unless you've been in China for a long time it's likely that you lack the local knowledge of Chinese people, and that they will also have forged relationships which could be beneficial to your business that you may not have.

Also if you think about dealing with other Chinese companies it makes sense that they would feel more comfortable with dealing with a 'mixed' company, rather than being faced only by foreigners.

This isn't about them disliking foreigners, actually local business are increasingly used to dealing with foreigners as the numbers of foreign business people in China continues to increase, but they may well feel that your company is more credible if you have local staff as well as foreign.

Finally, with the right local staff there's a very good chance that they will enrich your business and teach yourself or other foreigners there new things and broaden their China experience by illuminating things that may not have been obvious to a non-local, not to mention the chance to increase dialogue in Chinese between your staff, and the building of international friendships as they socialise together.

China is facing a labour shortage, where it's predicted that within the next decade the working age population will fall (Source: Washington and Lee University). 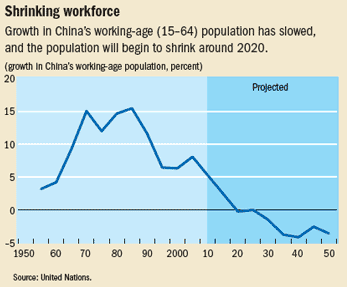 The one child policy and rising costs of living are mainly responsible, as within the last generation it's estimated that between 100M to 400M less children have been born, and now, even with the Chinese government's relaxing of the one child policy, many Chinese workers are increasingly more focussed on work and earning money than they are of raising children.

This leaves the government with a big problem, as pensioners will soon outnumber tax payers, leaving a big hole in China's finances, and putting unwelcome strain on its economy.

What does this shrinking pool of workers mean to foreign companies in China?

We haven't yet reached the tipping point, but its coming fast.

The result will be that the labour market will offer less experienced, skilled local labour for hire.

It may also mean that the right staff will command higher salaries and better packages than currently where they are under pressure from more competing staff.

The good news for employers is that this may not apply to recent graduates as quickly.

"As of the January-March quarter of 2014, there were 1.293 million young job seekers who graduated in the last year or earlier but had yet to find a job through employment agencies in 102 major cities." (Source: World Economic Forum)

The issue is whether employing a recent graduate is right for foreign companies operating in China. For entry-level positions where training is offered and lesser expectations demanded it seems there is still a good amount of potential staff, but for experienced and skilled workers the pool is shrinking rapidly for those of us doing business in China.

How To Attract Chinese Staff? 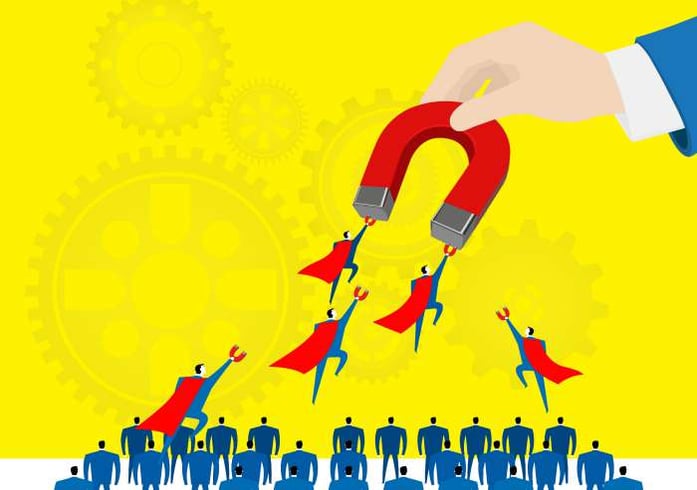 Based on the above information about China's declining pool of workers, it's going to be more important than ever to offer any Chinese staff you're interested in hiring a competitive salary and package.

For the uninitiated, the world of work in China is quite peculiar in comparison to the West.

Employees are quite prepared to quit their jobs and move after perhaps only a year or two for a variety of reasons. What's more, they often quit without a new job in place!

Western staff would be very reluctant to do this as they'd be afraid of not being able to get another job, so what causes this attitude amongst the Chinese?

There are 2 main reasons:

Firstly, a booming economy will always offer plenty of work, and China's is no different. Given that many people are migrant workers (they work in a different part of China, ofte far from their home town), they're not afraid to pack up and move to another city in search of work. This attitude isn't so prevalent amongst Westerners.

Secondly, many Chinese staff feel that they lack support and benefits from their management.
This is a very complex situation, as it is both cultural and economical in nature.
Many Chinese managers are reluctant to invest too much time, effort, and training resources into their new staff as they fear that they will soon leave. Therefore giving them cursory training and just enough resources with which to do a job is the path of least financial and time risk for the company.

While not giving more support and training to staff would seem peculiar to many foreigners, there can be a distinct lack of trust between management and staff in China until a strong relationship has been built. This is a cultural matter, as in China it is a long and complex process for strangers to become trusted colleagues (or friends in personal life). Only time, effort, and sacrifice on staff's behalves may earn the trust of managers, but can they wait? Couple that with China's high staff turnover rate of 35% of staff at international companies, and you can gain an insight into the mindsets which cause this phenomenon.

It's a vicious circle. Managers don't want to risk time, effort, and money on staff who they fear will leave soon, and staff feel that they would like more support and training or will otherwise leave in search of greener pastures.

So as potential foreign employers we can learn that Chinese staff may feel that if they're not 'valued' that they can change jobs without much difficulty. Luckily, coming from abroad it's arguably much less common that staff don't receive thorough training, support, and excellent tools in order to do a first class job. We also don't have the same cultural hang-ups as local people, meaning that 'giving new hires a chance' will come more naturally.

Interestingly local staff expectations differ from those of Westerners at the same level. This gives us useful insight into what their expectations would be.

China’s 2014 university graduates report high salary and opportunities to advance as the two most important career traits, followed by high future earnings, clear advancement path, and professional training and development. On the other hand, western employees report employer culture and interpersonal relations as the primary determinants of occupational attractiveness.

We can see then that relationships between staff are not such a priority for the Chinese, whereas good salary and career prospects are paramount.

Given that you are a 'foreign company' in China, it will be expected that you can offer a good salary by usual standards in your area, but on the other hand you'll also be expecting a higher calibre of staff who, for instance, speak English (or other Western languages) fluently, and have better qualifications.

Since the trust isn't such an issue, we would suggest that most foreign companies could and should be able to be clear and open about a candidate's career prospects. Since the standard way of thinking in the West tends towards the longer term, you can please your new local staff with a firm career path mapped out for them.

It is also important to offer an arm around the shoulder and some regular training. Since this is an expectation that is often overlooked by local companies, by offering this as a benefit it makes your company so much more credible and desirable.

Where To Find The Right Chinese Staff? 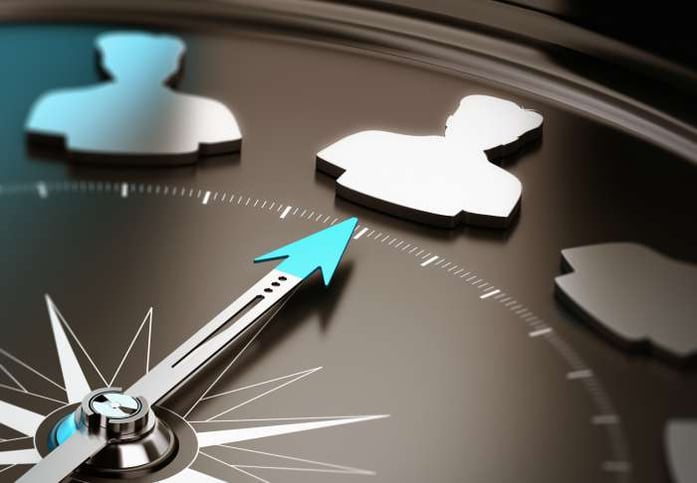 These days most Chinese people in major cities are used to looking for work online.

Channels such as LinkedIn and WeChat cater very much for the more cosmopolitan local crowd who are often bilingual, and then there are the giant Chinese job sites like 51job where many people will be searching in Chinese for job openings.

The major cities also have a proliferation of websites catering just for their locality.

Hongda are in Guangdong's PRD (Pearl River Delta), and both Guanzhou and Shenzhen have their own English sites such as Guangzhou Stuff and Shenzhen Party, both of which offer job listings and postings by bilingual candidates looking for work. These websites not only offer foreign companies job listing and hiring options, but many local networking events are listed in them too, and these will also offer a great opportunity to meet new potential staff and build business relationships.

Are you a foreign company in China? What challenges have you faced when hiring local staff? Are there any specific needs that you have found that locals expect or require in comparison to foreign staff?

How have you found staff retention? What has caused them to stay with you, or not as the case may be?

Please let us know your thoughts on how to attract Chinese staff by leaving a comment for our community!