Blog Should I Set Up A Representative Office In China Rather Than A WFOE?

Should I Set Up A Representative Office In China Rather Than A WFOE?

A client recently asked me this question, and it's not the first time that I've heard this.
The answer about whether your business will benefit from a representative office in China really depends on your circumstances, so let's look into it in this post...

So You've Heard A Representative Office In China Is Right For You? 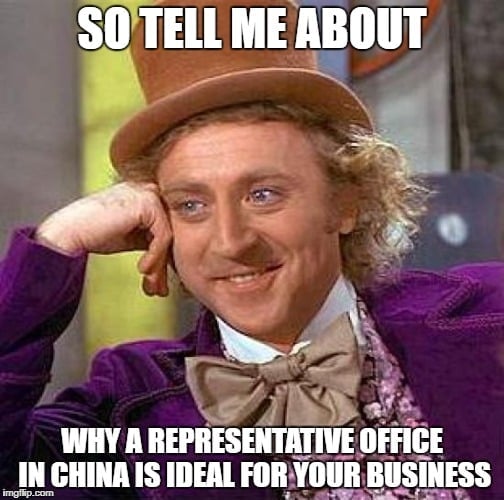 Let's kick off by revisiting what a rep office is.

A rep office is also known as a 'liaison office,' and this is an important word as it gives you a large clue into what the RO is really for. For outreach activities in China such as market research, liaising with clients or suppliers, developing a local network, advertising, renting business and personal premises.

Learn more about The Pros and Cons of a Representative office in China.

It's a legal entity in China which can hire staff and takes far less time to set up than a WFOE (approximately 2 week versus a couple of months), and so the attraction to foreign businesses wanting to get a presence in China is understandable.

The problem is what an RO is not permitted to do.

Regardless of the other points, the top one (trade) should start alarm bells ringing for many people who are looking to set up a company in China.

What's more, an RO is still taxed in China as well, despite having no right to earn an income, and typically the tax is a flat rate of around 11% of the company's total spending.

If your RO starts to scale and costs go up you would quickly find the tax bill swelling, and this would never be going down either, whereas with other companies there would be ways to actually reduce your tax bill over time (which just aren't available for ROs, such as VAT rebates, tax-deductible expenses, etc).

An RO is likely to be a very useful company type for a foreign business who need a presence in China, but who don't want or need to trade.

For example, if you import goods from China, and your foreign parent company deals with all of the paperwork (whether they're in your home country, or you have an HK company to deal with trade in China), you may find that having an RO with a few staff who can 'keep an eye on your suppliers' (by performing factory visits etc) is very advantageous. If this is its only purpose, then it is likely to be a static cost and worthwhile.

Don't Be Tempted To Break Rules

Some people may have been told: "Rep offices are easy to set up, so why not just do that and then trade 'under the table.' It's easier to do that the go through the hassle of opening a WFOE."

Not only is this poor advice, it's also illegal. A rep office still needs a legal representative, and this person alone (as well as other staff) would be in danger of an unpleasant visit from the police.

We all know that person who 'has been doing it for years,' but we always advise our clients to start and do business in China in a compliant and legal way.

Anyway, despite opening a WFOE taking longer than an RO, it's more straightforward these days than before and a WFOE offers many benefits when doing business in China.

A representative office in China is a very specific company type - it's for businesses who want a presence in China which is not connected to trading.

There's nothing wrong with an RO, but it just doesn't cover as many bases as a WFOE (or JV for that matter). Learn more about this in this blog post: WFOE vs Representative Office vs Joint Venture.

If you have previously formed a rep office and now feel that you need to 'convert' it to a WFOE, read this.